Posted at 20:24h in Insights by Natalie Copeland

Abortion could be a major factor in 2020 election, but media conversation is largely event-driven

A recent Monmouth poll found that a third of adults nationwide say the issue of abortion is either “very important” or the “most important” issue in how they vote for President in 2020. Recent state legislative efforts––on both the pro-life and pro-choice sides––have heightened the issue’s salience.

Certus insights conducted a Snap Audit of print and online news media around the topic to understand the extent of the media conversation on abortion and sub-topics. Our analysis was based on the number of social engagements (likes, shares, retweets, and comments) that has been generated.  The audit examines stories published over the past year, between June 26, 2018 – June 25, 2019.

Over the past year, there have been 656,165 news stories about abortion, which generated an estimated 148,811,899 social engagements (likes, shares, retweets, and comments).

There were a six event- driven spikes in the past year. The first three spikes (instances with exceptionally high volume of stories) occur in 2018 and are driven by changes to the U.S. Supreme Court be it Anthony Kennedy’s retirement, Trump’s nomination of Brett Kavanaugh, or Kavanaugh’s confirmation hearings.  The remaining three spikes occurred in 2019 and vary in their subject matter.  The first peak in conversation occurred in February and was driven by President Trump’s State of the Union Address.  The second two peaks were driven by Alabama’s fetal heartbeat law, which prohibits abortions after 6 weeks of pregnancy, and other state legislation action.

Here are the spike dates: 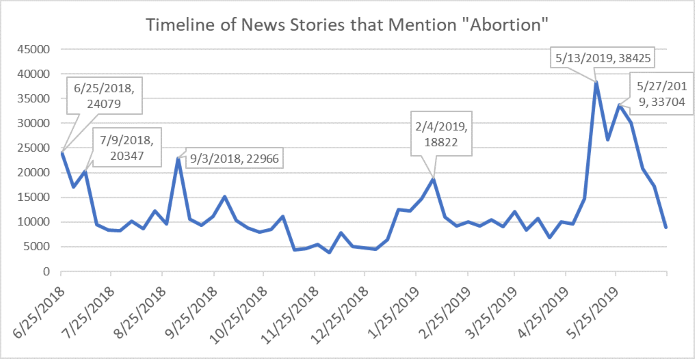 Most engaged stories in the past year Include:

The dates examined for this media Audit is June 26, 2018 to June 25, 2019, within publicly available, English-language, U.S. news media.  It does not account for the social media conversation or individual social media posts.